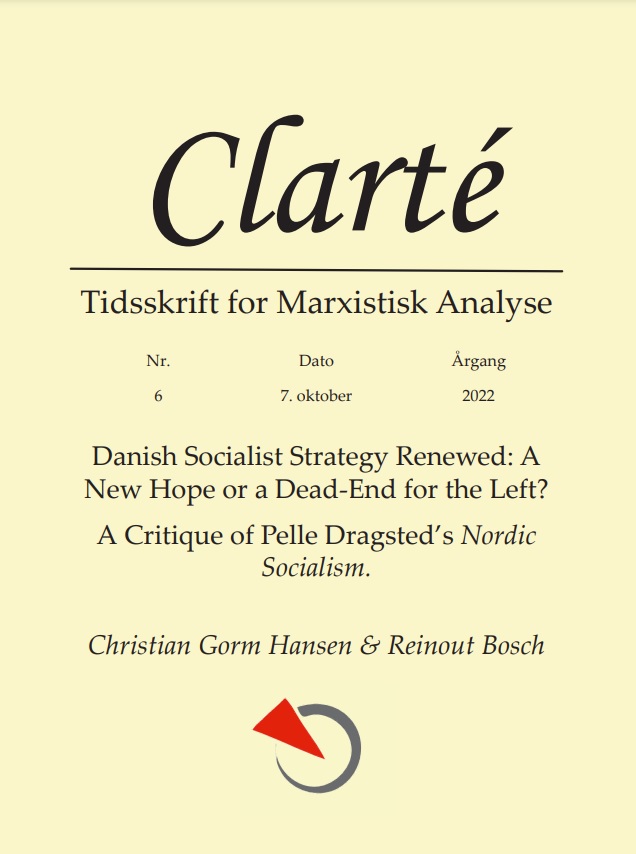 Abstract: Pelle Dragsted’s Nordic Socialism. Towards a democratic economy (published May 1st 2021) has reignited the discussion about socialism in 21st century Denmark. In the book, Dragsted presents a tactic of eroding capitalism from within based on the premises that a socialist mode of production is not a development to be sought in the future but already present in society. As a political strategy it thus relies on the development of the welfare state and different existing kinds of cooperative production.

In this article, the authors raise a critique of the fundamental premises on which Dragsted constructs his theory as well as the methodology he applies. Specifically, it focusses on central concepts in Nordic Socialism such as ‘capitalism’, ‘hybrid society’, and ‘modes of production’, and shows that these are conceptualized in a different sense than the common scientific usage. Such a reformulation enables Dragsted to put forward a theory of parallelism between different ‘modes of production’, where the central denominator for their definition is the principles by which they are governed.

Instead, the discursive reformulation of the concept of capitalism, which Dragsted restricts only to denote the direct relationship of exploitation, is rejected in favour of an understanding of capitalism, where the market is the central mechanism to be overcome.

Finally, the authors look at the implications Dragsted’s premises have for his notions of who can actively be engaged in fighting for the visions he proposes. Here it is proposed that the vision presented in Nordic Socialism will not be able to engage a movement in the population, as its theory does not award the public an active role in the fight for (a Nordic) socialism.